We are supported by our audience. When you buy through links on our site, we may earn an affiliate commission. Learn more

Sailing may sound like a luxurious hobby, but once you experience the full-blown thrill of it, the cost will all be worth it. An interesting thing about sailing is that it is not just considered a hobby but a sport as well.

Controlling the sailboat takes a lot of skill and expenditure of energy. And to help control the boat better, a special tool like a winch is essential. So considering your hobby/sportsmanship, it’s important to choose between self tailing winch vs non self tailing winch.

We have listed comparisons and differences between the two types, which will help you decide to pick the best one for your sailboat.

Apart from some small differences in additional structures, both self tailing and non self tailing winches are shaped like drums.

Similar to dumbbells, they both have a large groove in the middle where the rope is rolled up. 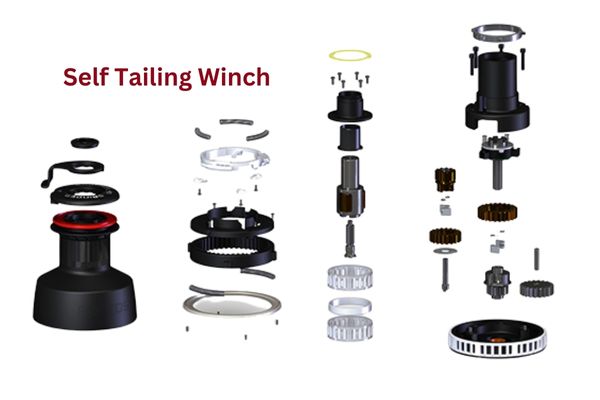 As sailing requires a lot of skill to control the boat, both self tailing and non self tailing winches have been designed to manipulate the sail against the wind.

Both types are needed to retract the rope to prevent it from slipping when it is being tightened.

A non self tailing winch is basically a smooth drum with a large groove in the middle where the line is rolled in. There are no extra parts that will tail the line in place when hauling.

But in a self tailing winch, you will find a set of “teeth” towards the top of the drum, along with a post that allows moving the line up to the top. This way, the line gets tailed on its own. It basically serves as a jam cleat.

The way a self tailing winch functions is suggested by the name itself. This type of winch does not require the person to hold on to the line for hauling when turning the winch. Such a feature allows the sailor to control the boat by themselves, without another person having to hold the line.

However, for non self tailing winches, some extra work needs to be done. You will need to manually crank it with one hand and then pull on the extending line with the other hand. To prevent the line from slipping, it sometimes requires another person to pull the line.

A self tailing winch might initially seem like a better choice since it can be used by a sailor without extra help from another person. But this type of winch has its challenges as well. There are both good and bad attributes of the two types of winches.

Challenges And Advantages of Self Tailing Winch

Another danger of self tailing winches is that releasing the line takes longer because of the jaws at the top of the drum. Also, when the release is not done properly, there might be very little friction.

The sudden pull can cause severe injuries to the person holding the rope, though this usually depends on the manufacturer and how the specific winch is designed.

However, the overall design of a self tailing winch allows sailors to work independently. When operated correctly, this type of winch is overall safer to use.

One major drawback of non self tailing winches is that the rope can get tangled when releasing it, which can cause injuries to the person operating the winch and also to people around it.

Non self tailing winches are good to make maximum use of the sea winds, thus increasing the speed of the sail. The specific design of it involving the use of friction to crank up the winch is what allows it to make optimum use of the sails.

This particular type of winch also comes in handy for various activities, such as hauling halyards and even pulling boats stuck in the water.

As you have just seen, it is hard to pick a winner for our self tailing winch vs non self tailing battle because they each have their own set of usefulness and slight drawbacks. But if we were to pick one, the winner would be self tailing because it is easy and safe to handle, despite it being more costly.

But all those extra bucks will all be worth it. Some people even go and convert their non self tailing winches to self tailing ones, which shows that it is a better choice.

Comparison You May Go Through:

AutomobileNote.com is a participant in the Amazon Services LLC Associates Program, an affiliate advertising program designed to provide a means for sites to earn advertising fees by advertising and linking to Amazon.com. As an Amazon Associate, We earn from qualifying purchases.

Also Find Us On